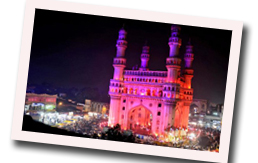 Charminar is One of the most visited place in Hyderabad for its beautiful minarets views. Charminar was built in 1591 by Mohammed Quli Qutb Shah and is a beautiful structure with four intricately carved minarets. The city is often identified with the majestic Charminar, which stands at the center of the old city in its entire splendor amidst the colorful shops of Ladbazaar with its glittering traditional bangles, Often called "The Arc de Triomphe of the East", tales has it that the emperor Quli Qutb Shah interceded for the end of plague and took the vow to develop a masjid on that very own position. Real to the emperior, the city started into a functionality of two cultures. In 1591 while installing the foundation of Charminar, Quli prayed: Oh God, provide unto this city peacefulness and success. Let an incredible number of men of all castes, creeds and belief systems create it their residence. Like fish in the water. It is considered there is an undercover tunnel linking Golkonda to the Charminar, to allow the Qutb Shahi vips to break free during difficulty. The actual position of the tunnel is mysterious. 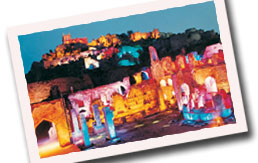 Originally a mud fort founded by the Kakatiya Kings of Warangal during the 13th century, Golconda attained glory under the Qutub Shahi dynasty (1518 to 1687). This is where the priceless Kohinoor diamond was found. One of the famous forts of India, an added attraction here is an enchanting sound & light show in the evenings. One of the most interesting look of Golconda Fort is its system of acoustics. The sounds of hands clapped at the entry gate can be heard clearly at 'Bala Hissar', the highest point, a kilometre away. The timings of the show are different during summers and winters. During November–February, the shows begin at 6:30 pm, and during March-October, the shows begin at 7 pm. On Wednesdays and Sundays the shows are presented in English; on Tuesdays, Fridays, and on Saturdays, in Hindi; and on Thursdays, Telugu. 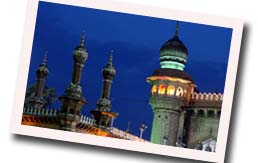 Mecca/Makkah Masjid: The biggest historical mosque in the southern region, located near charminar, iThe Qutub Shahis never finished the building of the mosque, which was completed by Aurangzeb in 1694. Mecca Masjid is poetry in stone, with a hall measuring 67m and soaring to a height of 54m. Fifteen graceful arches - five to each of the three sides, support the roof. Towards the southern end of the mosque lie the marble graves of members of the Asaf Jahi dynasty. Located at Old City near Charminar, Hyderabad. 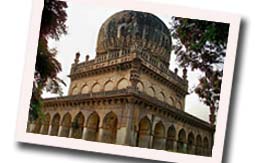 The Qutub Shahi Tombs is the funeral land of the seven kings of the Qutb Shahi empire are located at Ibrahim Bagh Tolichowki near Golconda fort. The tombs are very well-known among travelers coming to Hyderabad. The Qutub Shahi Tombs are the best combination of Native indian and persian architecure forms, designed in greyish granite designed with beautiful artwork. these tombs are said to be the oldest historical monuments in Hyderabad. They form a large group and stand on a raised platform. The tombs are built in Persian, Pathan and Hindu architectural styles using grey granite, with stucco ornamentation, the only one of its kind in the world where an entire dynasty has been buried at one place. Timings: 9.30 am - 6.30 pm Entry Fee: Rs. 10 to 20 for Indian Nationals, Rs. 100 for Foreign Nationals. 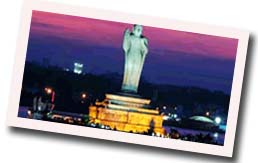 One of the biggest man made lakes is situated at Hyderabad. Its uniqueness lies in the fact that it connects the twin cities of Hyderabad and Secunderabad. A famous monolith of Lord Buddha is installed at the center of the lake. Hussain Sagar Lake is popularly known as the Tank Bund, a major spot of tourist attractions. The Hussain Sagar was constructed on a tributary of the Musi river by Hussain Shah Wali during the reign of Ibrahim Quli Qutub Shah in 1562. It is a sprawling artificial lake that holds water perenially. Every Sunday cultural programmes are conducted by the Department of culture in the evenings and admission is free for the public. Boating and Water Sports are a regular feature at Hussain Sagar. 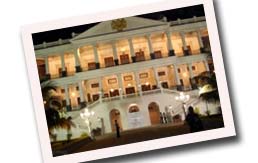 The palace is spread out in a scorpion shape with two pincers spread out as wings on the north. The middle part occupies the main building. The Harem quarters and the kitchen stretch towards the south, The palace was designed by an Italian architect in western style, and took 9 years for construction, and is completely built with Italian Marble. The foundation stone was laid on 3rd March, 1884, Falaknuma houses a collection of rare treasures collected by the Nizam including paintings, furniture, statues. The Jade collection of the Palace is unique in the world, The palace also has a library containing most valuable collection of books and manuscripts, The Palace also has the distinction of having a 100-seat dining table, The Palace is now converted into a heritage hotel by the Taj Hotels group. 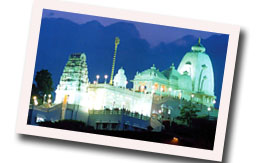 The various Birla mandirs constructed across the country were built by the industrialists Birlas. Sri Venkateswara, or Lord Lakshminarayana, is the deity of these temples. Strangely, however, these temples are known by the family that undertook the noble cause. The Birla Mandir in Hyderabad is built on the 280-foot-high hillock of Kalapahad. Birla Mandirs are constructed entirely using marbles. It is believed that it took 2000 tonnes of white marbles brought from the Indian state of Rajasthan to complete this holy place. The intricate marble carvings blending the South Indian architecture, Utkal temple architecture and Rajastani architecture is simply amazing. The view from the highest level offers the viewer a spectacular view of the Hussain Sagar Lake and the Public Gardens and Lumbini Park. 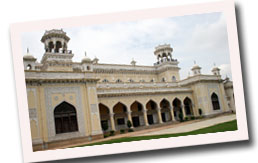 Chowmahalla Palace: Chowmahalla Palace is near the Charminar. It comprises of four palaces. The Asif Jahi dynasty made this palace as their seat. The official guests as well as royal visitors were entertained here. The heart of the Chowmahalla Palace is called Khilwat Mubarak, and houses the Clock Tower, Council Hall and Roshan Bungalow. Roshan Bungalow was named after the sixth Nizam’s mother, Roshan Begum. The palace was restored and opened to public in January 2005. After five years of documentation and restoration work, the first courtyard regained its former glory. Don't forget to visit Chowmahalla Palace when you are on your hyderabad tour. The chowmahalla palace is closed on friday. 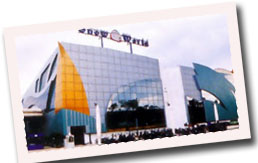 Snow World: Snow World is one of the most unique, intriguing and captivating attractions in the entire city of Hyderabad. This creative destination is a beloved favourite among all visitors, and offers a splendid opportunity and experience to all. With the warm, summer atmosphere of Hyderabad, no one would expect to stumble across an amusement park that allows it to snow! As the biggest snow park in the entire world, this is truly a great place to capture memories in. Enjoy the pleasures of tobogganing, skating and snow ball fights all arranged here at Snow World in Hyderabad. 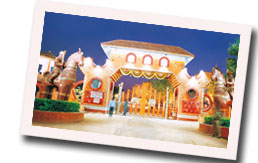 Shilparamam: Another attraction at Madhapur besides Hi-tec city in Hyderabad is the 30-acre village, which showcases arts and crafts of the country. India is an ocean of various arts and crafts but the talent of most of the artisans and artists goes unrecognized. To encourage them and give the necessary boost to their art, the crafts village hosts annual bazaars, where artists and artisans from all over the country exhibit their talent. 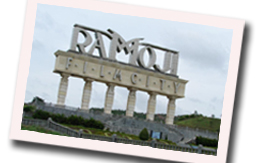 Ramoji Film City is the world’s largest integrated film studio complex at over 2,000 acres of land. It is also a popular tourism and recreation centre, containing both natural and artificial attractions. It is situated on Hyderabad - Vijayawada, highway, about 25 km from Hyderabad. A Japanese garden, the ETV planet (a multi-purpose editing suit), a pool, artificial waterfalls, breathtakingly accurate airport terminal, hospital set, railway station, churches, mosques and temples, shopping plazas, palace interiors, chateaus, rural complexes, urban dwellings, and a winding highway are some other places for tourists to visit. For shopping you have, some nice handicrafts, pottery & decorative articles to purchase.